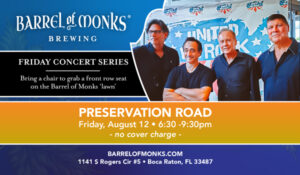 Every month we host an outdoor concert open to the public.

Bring your own chairs. 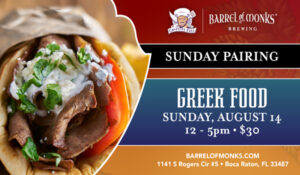 Every month Cheffrey Eats blows away with their amazing menu for our pairing events. This event will take place on Sunday August 14th. Serving time 12-5PM. Business hours 12-7. Greek cuisine is the theme this month. The Cheffrey Eats crew will create 4 unique Greek inspired bites to be paired with 4 Barrel of Monks beers. 4 bites & 4 5oz beers for only $30! Food Menu: Dolmades: Grape leaves stuffed with rice and beef served with a lemon butter sauce Falafel: served in a pita with lettuce, tomato, onion, and Tzaziki! Grilled Chicken Kabob: marinated in yogurt with cucumber, cherry tomatoes, and onion Pistachio Baklava *Reserve your pairing by purchasing online, otherwise it is first come first served. Get Tickets
Sat. Aug 20, 2022 8:00 pm - 10:00 pm 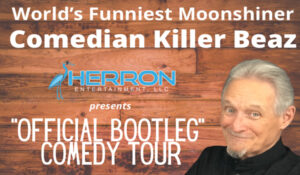 Comedian Killer Beaz, "Southern Comedy - Straight Up!" in celebration of his 7th season on Discovery Channel's hit series Moonshiners.  He is a regular on the Grand Ole Opry and Circle TV, along with a huge list of credits from ABA, NBC, CBS, Showtime, GAC, A&E and the list goes on.
Beaz started out his latest tour with appearances on the Grand Ole Opry and the new season of Discovery Channel’s Moonshiners. He then joined a syndicated radio show, Radio Dogs Road Show, and is celebrating the recent release of his DRY BAR Comedy Special, “Southern by the Grace of God!”  Beaz just finished filming for another television show for the Discovery Channel, Master Distillers as well as filming a show he hosted for Circle TV, and is back, continuing his tour.

They will be at the Brewery from 8-10pm on March 12th. Come early grab a beer and some food from Cheffrey Eats.

PLEASE NOTE: You will not get a physical ticket for this event from our online system but your purchase will be recorded in our system and we will check you in by ID. Look for a confirmation email after you complete your purchase. 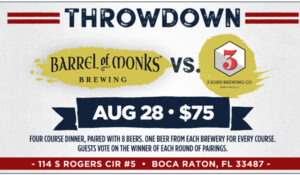 This Throwdown we will be going up against our friends from 3 Sons Brewing in Dania Beach.

The rules remain the same; after each course you will vote on which beer was paired best with each course. At the end of the delicious 4 course meal, provided by the Cheffrey Eats crew, a champion will be crowned!